What to Do if You're Driving and See a Tornado 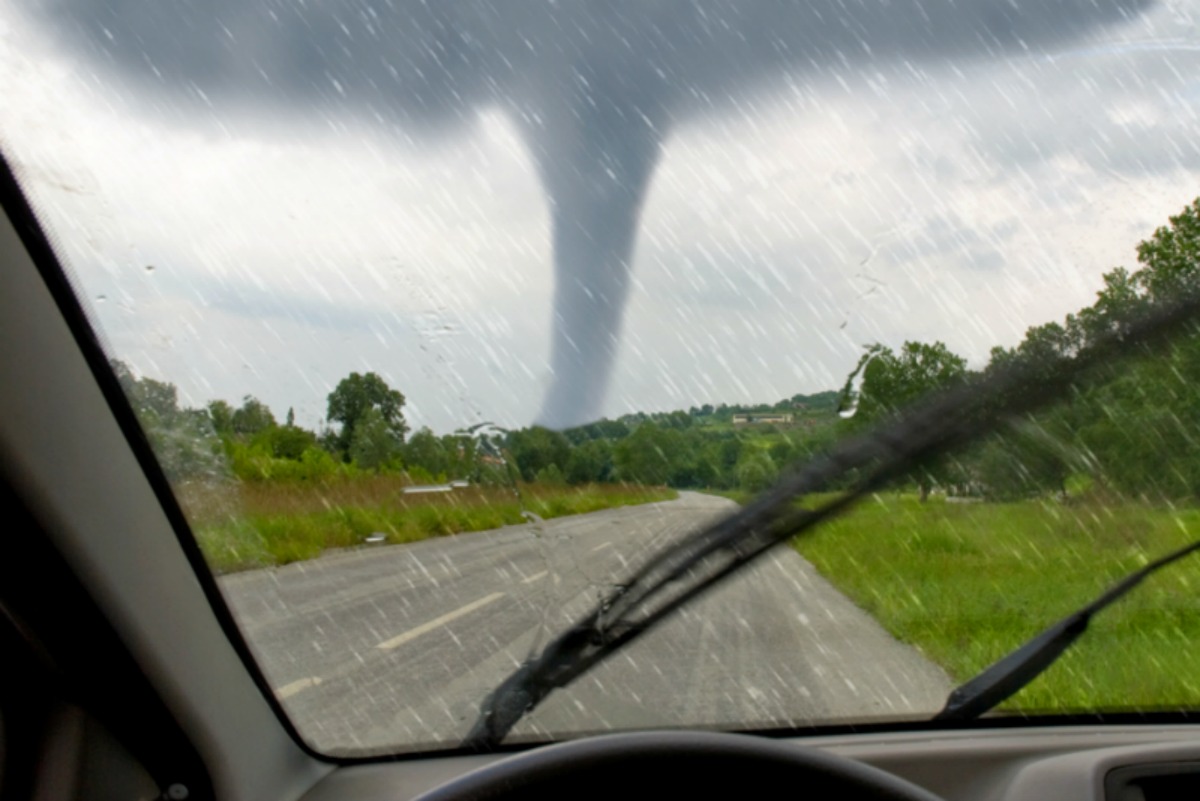 It can play out like something out of an action movie—you're driving along and spot a tornado swirling on the horizon of darkened skies. Here's what you should do if you're driving a rental car and see a tornado.

Where and When Could You See a Tornado

Your chances of encountering a tornado in the U.S. depend on where you are, and when you're driving. The trademark sign of a tornado is a fast-spinning funnel cloud, although they are not always visible. Some other signs of a tornado may include dark clouds with a greenish tint and a loud sound that resembles a train.

According to the National Climatic Data Center (NCDC), about 1,200 tornadoes strike the U.S. every year. While it's possible for a tornado to touch down in any state, the vast majority occur east of the Rocky Mountains.

In particular, two areas of the country see a higher rate of tornadoes than other locations. The first is the state of Florida and the second is the multi-state region commonly referred to as "Tornado Alley." The latter area, while not delineated by official boundaries, generally refers to areas of northern Texas, Oklahoma, and portions of other states such as Kansas, Nebraska and South Dakota.

Tornadoes can hit during any month or time of day, but they are more frequent in spring and summer, and between the hours of 3 p.m. and 9 p.m. In southern states, peak tornado occurrence is March through May, while peak months in northern states are during the summer.

Dos and Don'ts if You See a Tornado While Driving

Tornadoes are notoriously unpredictable, but there are some precautions you can take.

DO monitor weather news sources. If a tornado is approaching, you may hear a siren in cities or towns (although generally not in rural areas). If you're heading into tornado country, stay tuned to weather reports on the radio or download the Tornado Warning App from the American Red Cross. You can also text "GETNADO" to 90999.

DON'T seek shelter under a bridge or highway overpass, as they can become wind tunnels. If you're in the car when a tornado warning is issued, pull over and take shelter in the first sturdy building you find, like a rest stop plaza, convenience store or restaurant.

DO pull over and park if you encounter extreme winds and flying debris while driving, the Red Cross advises. Keep the engine running, your seatbelt on, and make sure your head is below the windows. Use your hands to cover your head, and a blanket if you have one.

DO look for lower ground or a ditch. If you can safely get noticeably lower than the level of the roadway, leave your car and lie in that area, covering your head with your hands.

DO put your own safety first. In a tornado or any other dire situation, your safety is the most important consideration—not what happens to the rental car. Still, it is worth noting that you may be responsible for damages related to any weather.

Before you pick up your rental car, it's a good idea to double-check whether your personal auto insurance or credit card will cover a rental car in an "act of God" situation like a tornado. Ultimately, this will inform your decision about whether it is necessary to purchase a Loss Damage Waiver (LDW) from the rental company to avoid being responsible for any weather-related damages.